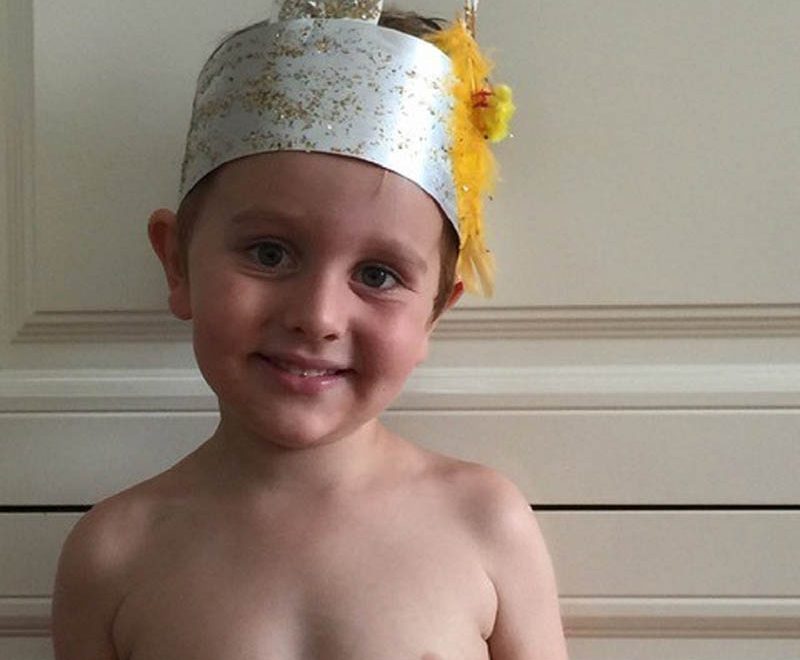 On Fathers Day September, 2012 our five-week-old baby was diagnosed with cancer.

We were living in Perth at the time and had taken baby Arthur to see a number of GP’s and Pediatricians already, as well as visiting Emergency, as he was in constant pain and would not stop crying. Because he was my second baby I just knew there was something wrong and that it was not a breast milk allergy or him having a lactose intolerance or colic – which is what most people thought it could be.

Luckily on the day we took Arthur to hospital, a surgeon (who ended up being the future surgeon for his impending surgeries) decided to run an ultrasound on him – and that’s when a large tumour was found and he was diagnosed with neuroblastoma. The tumour was in the para-spinal region, pushing into the spinal canal which is why it was causing him extreme pain.

Arthur began emergency chemotherapy when his legs stopped moving a few days later from the tumor pushing across his spinal canal. He had four cycles of chemotherapy at Princess Margaret Hospital in Perth as well as blood transfusions, surgeries and a staph infection in his broviac line during the process.

With only one in every two children diagnosed with Neuroblastoma surviving the devastating disease, Arthur is one of the lucky ones. The operations and treatments were a success and 4 year old Arthur has now been in remission for 3 years. However, now relocated to Woollahra in Sydney, he still goes for regular check-ups at the Sydney Children’s Hospital in Randwick to monitor his condition.

In 2010, two passionate parents who also had children battling neuroblastoma set up Neuroblastoma Australia. The charity’s mission was to support families like Arthur’s, via research, so that they can survive and lead long and healthy lives, free from the side effects of their treatment.

One of Neuroblastoma Australia’s biggest fundraising events is the Annual Run2Cure and it will be taking place again this year Sunday, 4 June 2017 in the picturesque surrounds of the Domain and Royal Botanic Gardens, Sydney (from 7am – 1pm).

The aim of Run2Cure is to raise $150,000 for vital research at the Children’s Cancer Institute Australia and Cancer Council NSW into, neuroblastoma – the number one cause of cancer deaths in children under 5 years of age.

A unique fun run for all ages and abilities, Run2Cure consists of a 1km Little Heroes walk for children 5 and under (where kids big and small are encouraged to come as their favourite super hero!), a timed 3km, a timed 5km and a timed 10km run. There is also a 5km and 3km competition for schools for the first time.

Participants are encouraged to register for the event as individuals, families or groups and help fundraise for the event – with monies going directly to support much needed research in this greatly underfunded cancer area.

Since 2012, Run2Cure has raised more than $430,000 for research into neuroblastoma but further funding is needed to continue this research to help improve the lives of, and outcomes for patients with neuroblastoma – the number one cause of cancer deaths in children under 5 years of age.

Please show your support and register for Run2Cure today: www.run2cure.org.au