Local Chat with Simon from The Wiggles

Little do thousands of eastern suburbs kids know but they have a Wiggle living in their neighbourhood!!

Simon Pryce, the Red Wiggle is a resident in Sydney’s East and chats to Eastern Suburbs Mums about his favourite spots in the east and about the great new album Carnival of the Animals which he has written and narrated.

How long have you lived in Sydney’s east?

I have lived in Sydney’s East for close to 20 years, spending most of my time in Coogee and Clovelly.

Favourite café in the east ?

I love going out for breakfast so I have spent time in many different cafes over the years. My favourite at the moment would be Little Kitchen in Coogee.

Favourite outdoor activity to do in the east?

My favourite outdoor activity would have to be running the Coast. I usually run to Bondi Beach, do a workout at the Bondi Bars and then run home. It is one of my favourite things to do when I’m home. I never get tired of the view.

If you were a child where would be your favourite place to hang out in Sydney’s east?

Centennial Park would be my favourite place to hang out in as child. There is always so much to do there. A great place to ride your bike, playgrounds to play on, people on horses riding by, football fields to run around on and plenty of room for picnics with the family.

My favourite beach is Clovelly Beach. It’s close to home and it’s a real mix of people of all ages. You also have the option of hanging out on the sand or lying on the concrete on the sides. If I’m feeling really energetic I’ll even give the run swim a go during summer.

Where did you get your inspiration for music and new album ?

My background has been mainly in classical music, having been involved in music theatre and opera over the years. I love the idea of introducing Classical music to children at a young age. I was exposed to it from an early age with both my grandparents being Opera Singers and so that appreciation of Classical music has stayed with me throughout my life.

The new album Carnival of the Animals is a beautiful piece of Classical music which introduces children to the instruments of the orchestra. It does it in a fun, engaging way as the instruments of the orchestra make the different sounds of the animals. I have written and recorded a fun narration to enhance and accompany the music which tells a story that an early childhood audience would enjoy. It’s prefect for story time at home, at school or while you travel. It is music that the whole family will enjoy.

Why is dance and music so important for preschoolers?

Dance and music is so important for preschoolers in many different ways. On a physical level it gets children up and moving and creates some physical awareness
and coordination from a young age. It’s very easy for children these days to be inactive, spending hours in front of screens so as The Wiggles we always try to marry words with actions to help the children get moving and to engage with the music.

Dance and music can also be used as an educational tool or to help in getting certain messages across. From things like learning the alphabet or counting or other types of messages such as healthy eating and being active. For example, The Wiggles songs like Getting Strong, Fruit Salad Yummy Yummy or Stop at the Lights are used to promote positive messages for children. Most importantly, music and dance should be interactive and fun and no matter how old we are it should put a smile on our face and a spring in our step.

Carnival of the Animals is available now on CD and digital download at: https://shop.abc.net.au/products/the-wiggles-carnival-of-the-animals-cd 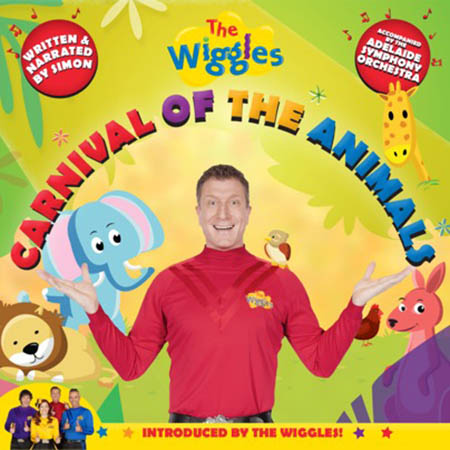