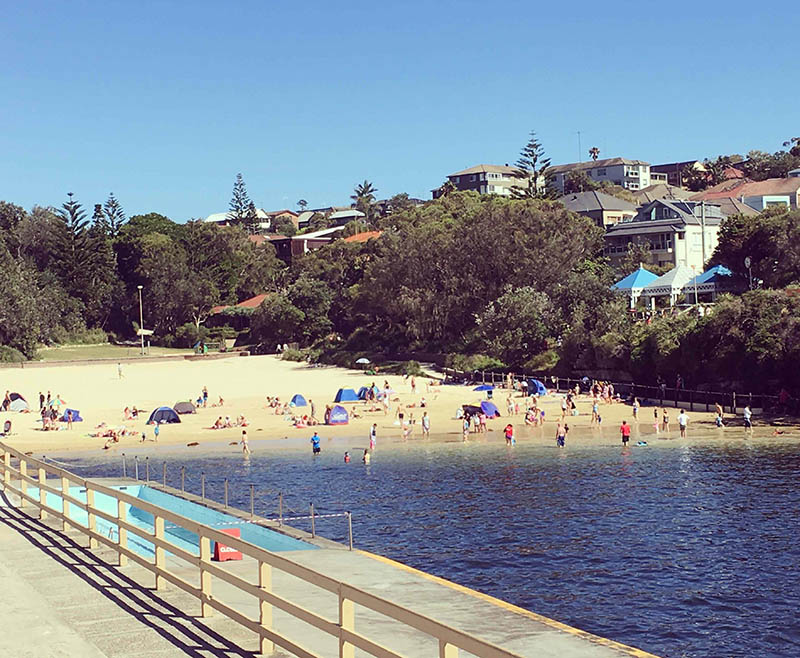 This small tranquil beach side suburb is located between Bronte and Gordons Bay on the coastal walk, Clovelly is more like a large ocean pool than a beach. Having originally being referred to as “Little Coogee”, this beautiful area came into its own in 1913 when it was renamed Clovelly after a village on the Devon coast of England and is affectionately known as “Cloey”

Popular for families and snorkelers, Clovelly has a LifeSaving Club, a 25×6 metre salt water pool and free on site car parking. The concrete platforms and promenades surrounding the bay make it a popular spot for sunbaking and the picnic tables and bar be que area makes it hard to go past for a family picnic or birthday party.  There is a small playground at the back of the beach which in all honesty the council could actually upgrade as it’s pretty much just a cubby house and there is not much else for kids to do.

If you fancy breakfast or lunch you can dine at the beach at the Sea Salt Cafe which offers kids food as well.  The Clovelly Hotel is also a good large pub nearby which offers children’s meals (all $10 each) and is a good venue for a family or friends lunch or dinner.

Clovelly is mainly a residential suburb with four small shopping precincts and restaurants dotted along Clovelly Road and Burnie Street. The Clovelly Hotel boasts the largest LCD screen in the Eastern Suburbs; Clovelly Bowling Club is located on the edge of the cliffs has been established since 1947 and enjoys draw dropping views from its greens and club house. Not just for Nanas, it invites one and all to be taught barefoot bowls!  It’s also a popular area for good yoga schools Yogamama specialising in prenatal and post natal yoga and also the lovely yoga space This is Yoga.

The spectacular views of Bondi to the North and Malabar Headlands to the South can also be enjoyed from the Clovelly cliff walk. This is part of the Bondi to Coogee walk and the walk between Bronte and Clovelly it incorporates a cliff board walk suspended in front of the Waverly Cemetery.

Clovelly has one school in its catchment area. Clovelly Public School officially dates back to 1913 although there was a public school operating in Varna Street as early as 1897. There is also a private Catholic primary school St Anthony’s located in Arden Street.

Burnie Park provides a great local playground and area for kids to play and there is a very well organised Clovelly Playgroup which is great for little ones and for parents to meet others in their community. For more info on the playgroup see our local guide here.

With a population of 4,581 people, there is high demand for housing in the area and in August 2016 a total of 11 properties sold. With a median house price $2,595,000, median unit price $1,072,500 the demographic of Clovelly is mainly maturing and established couples and families.

For more info on buying or renting in Clovelly contact www.buyeast.com.au